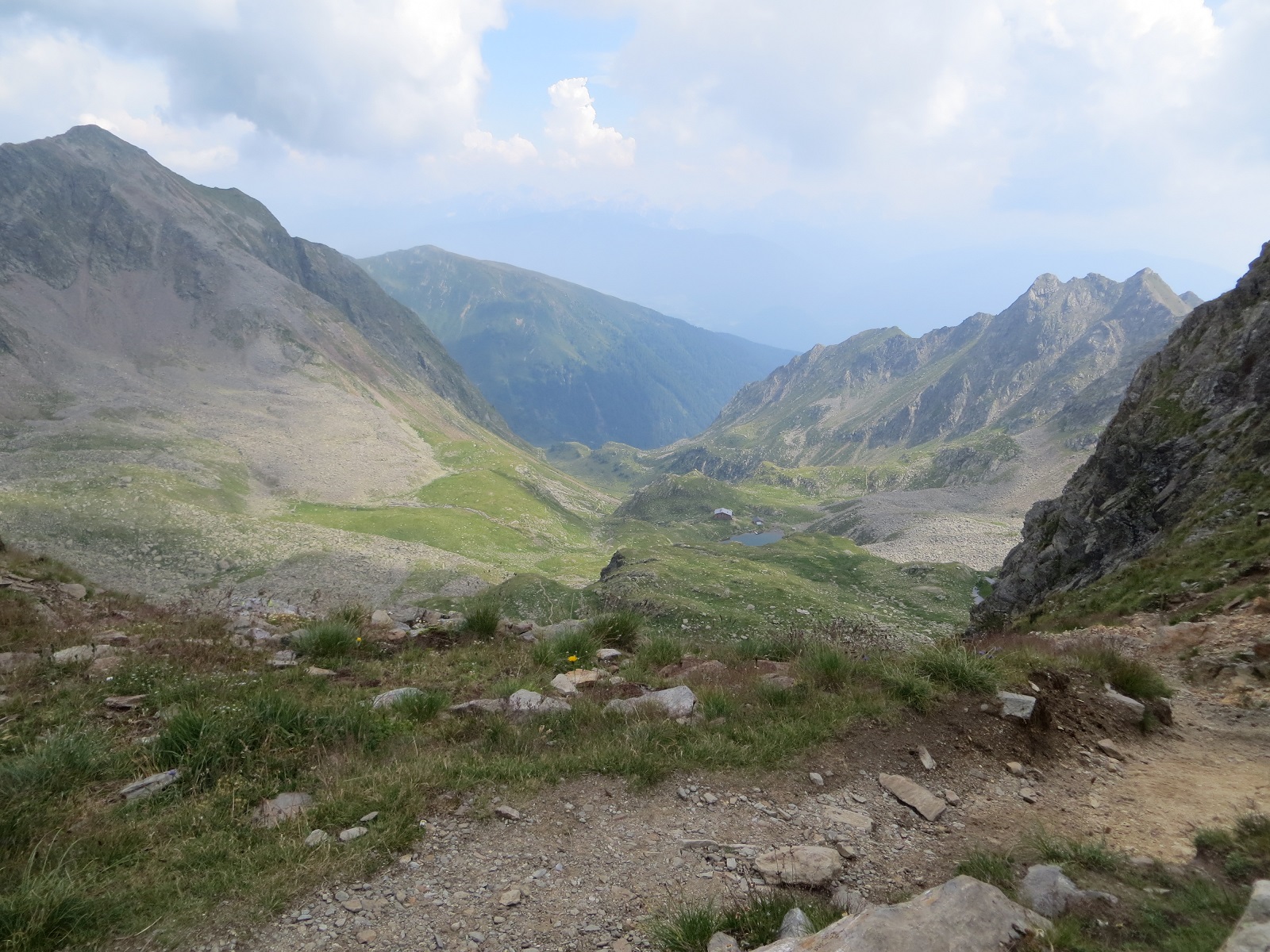 The 6th day was our longest. The official time was 7 hours (without breaks) we needed 9 (with breaks), so I think we were pretty good.
We decided to eat breakfast at 6 am to start early. However I was the only one sitting at 6 am at the breakfast table. As a result I ordered coffee like an alcoholic would order beer. (Normally I don’t start with coffee before 10 am). At 6:15 am people slowly began showing up. My uncle’s alarm didn’t go of…my cousin’s blisters needed attention…………
Eventually we started around 7 am not 6:30.

Everybody still tired we made our way down into the valley. Our goal was the Tiefrastenhütte 7 to 9 hours away. We were kind of energetic and had no idea what was about to come.

On our way would be two lodges where hikers could get something to eat and drink. The first appeared after only an hour. But in order to get there we had to cross a meadow full of cows. For everybody: Each year more people die through cows than sharks!
First they stayed where they were but just as we were watching some cute marmots /Murmeltiere Marie and I heard some troubling noises. Loud ringing! We turned, screamed and ran.
3 young bulls were galloping down the hill towards us, their bells making a way too innocent jingle.
My aunt however didn’t notice until they were right behind her. Luckily the 3 bulls made a slight turn past her. Unluckily they were still heading for Marie and me.
So we ran as fast as you can run with a 7 kg rucksack and hid behind Marie’s father. Together we slowly backed away through a small gate wich could sadly not be closed.
The three of us watched worried how the 3 cows came closer and closer. They were actually quite cute. Grey with huge black eyes and fluffy ears. Still they were huge and now 2 other older female cows joined them too. From time to time little brawls broke out between them and they kicked and bit each other.
My aunt however was stated cow expert of the family and really she just walked through the herd carefully keeping them at bay with her hiking sticks.

After this shocking experience we really needed some refreshment. And luckily the Alp/Alm to which the cows belonged appeared.
There a young and friendly woman offered us only 2 hour old milk from her own animals.
It tasted different than any milk I ever drank. Richer, creamier, better. Unfurtunately I can’t tolerate too much fat milk so I skipped the second glass.
Something my relatives later wished they had too. Milk and cheese are not the best things for a free hiking stomach.

Our journey continued up and down mountains. Everything you go down you have to go up again! That’s one of my cousin’s rules for hikers.

On our way we also saw baby marmots /Murmeltiere. They weren’t afraid at all and we could see them play with each other in the grass.

Then our way followed a huge mountain side and was approximately 50 cm wide. Once or twice one of us slipped but no one ever fell the 500 meters to our right down. While we were hiking at our speed everybody who didn’t leave at 6:30 that moring passed us. It was kind of annoying!

The second lodge was more a hundred year old hutt with an old man, his son and his grandson living in it. These houses are traditionally built that the animals’ stables are a part of the house. Downstairs are the cows and sheep then uphill is the second downstairs just higher with the space to live and upstairs is the hay.
The old man offered us self made cheese and bacon (I don’t like most cheese) and self made Apfelschorle. He was nice but due to his accent you couldn’t understand a word he said. But that’s the special thing about hiking you get to eat frech and local products and meet lots of kind local people. I don’t think you get two hour old milk in the city or eat cheese from animals you can touch at the same time.

Again they told us our destination was close just up that mountain over there. HA!
We needed two more hours!

First we made our way up a steep grass hill, then through a rocky field and then up huge stones with gaps in them so deep you wouldn’t see me if I stood in one of them. And if that wasn’t enough we had to climb up to a gash in the mountain and all the way down on the other side. Here the landscape looked much like pictures from Iceland!
My cousin and I found a new hiking rule that day: If you begin to start thinking about dragons and unicorns picking you up and carring you the rest of the way it is time that you arrive!
Sadly no dragon or unicorn appeared.

We more or less stumbled down. I was so exhausted I was talking nonsense the whole time! And of course I didn’t fell until I reached the staires inside the lodge!
Anyway for everybody: If you plan to hike for 9 hours make sure the worse part doesn’t come at the end.

Of course we met all the people that passed us during the day. And at night we had to share the room with 6 university students and 3 older man. They were loud and disrespectfull which is unusual for mountain lodges. So we had real luck that night! But hey, the next day we would be staying at the Tiefrastenhütte and having a good time and they were moving on.
Good night now to everybody who shares a bed with a snoring person!

One thought on “Pt. 3 From New Zealand to Iceland in one day!”