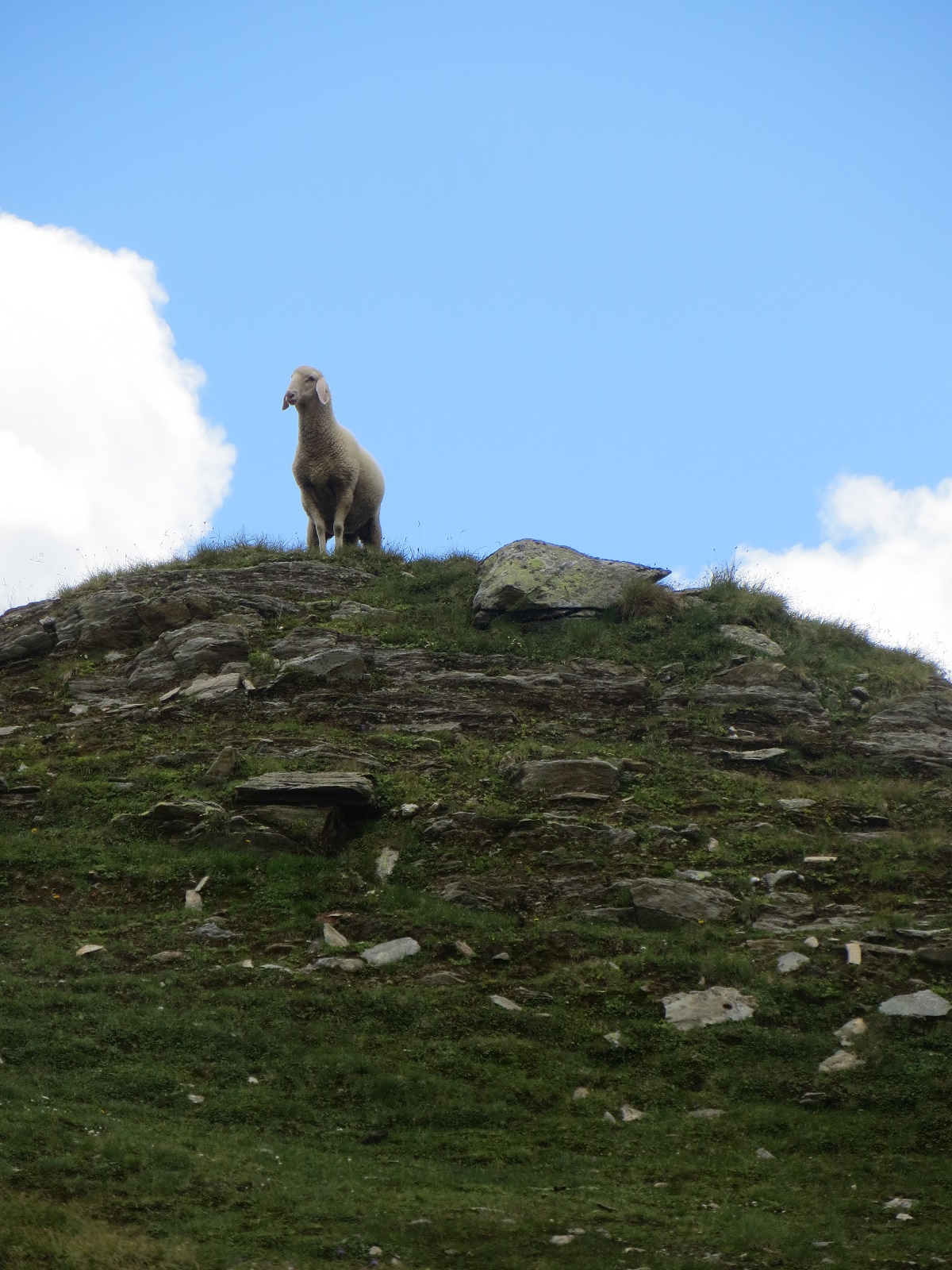 Our first morning up in the mountains was sunny and warm. Our welcoming hosts bid us farewell and we left early around 8 am.
The specialty of this mountain lodge was, that we could already see our next one! It was just well 5 hours away!

The first thing we noticed was that after a few minutes we were all out of breath. Not because we had no stamina but because already at 2300 meters the air got thinner. It was way more difficult to get enough air than down in the valley. My cousin had therefore a few headaches and dizzyness.

Our host advised us to make a minor change to our route to see a glacier. It would just take 15 minutes. We learnd fast not to belive any descriptions of locals! Anyway the second day was my favorite because there was no major climbing and all the time you could see the valley with a beautiful lake.
After an hour we reached the described place where we should leave the path to see the glacier. It was a wonderful stone spiral made by a university student 5 or 6 years ago. Then we climbed over a tree trunk to cross the river. We followed the river until we reached the foot of a higher mountain. There we decided not to go on because it got really steep and we would have to climb over huge rocks. Instead we took a break on the stones smootheredby the glacier. Even though everything was filled with stone and rocks and no plant except moss grew up there it was incredible beautiful. The water was clear and the lightest shade of blue.
And the clouds! They changed so fast up there it was great to watch them. The whole time little hurricanes built up there and dissolved again. Also almost the entire time you hear the bells of cows or sheep. It rings and jingles in a hundred different notes.

Unfortunately my cousin’s blisters got worse and we spent a while patching her up. She hadn’t a lot of fun that day!

As you all might see we were above the treeline. This way we could see really far and had absolutely no shade. So the next day I woke up with a sunburned ear that was swollen and red. But you got taned incredible fast!

We held our lunch at the bank of a little mountain lake. Here for the first time we met other hikers on our way today. The second day hiking was in fact the day we met most people I think. Probably because there were multiple day routes around the valley. But we never descended: We stayed on the hillside.

Around 2 pm the shoe of my uncle began to pinch as well. And of course we needed more than the 45 minutes to the lodge! Never trust hikers faster than you!

But eventually we saw the Edelrauthütte our destination! Here we would stay 2 nights and of course it was under construction. Luckily we never really noticed because they had no loud work to do.
It was just really suprising brushing your theeth in the evening and suddenly have 8 construction workers bursting into the bathroom. Only in the mountains you don’t mind. Everybody is friendly (maybe annoying but friendly) and you are just too exhausted to care! Your hair is a mess? I don’t care! You are a stranger and running around in you underware in front of me? Hey, no problem, I don’t care! Your dog looks like he wants to eat my shoes? I don’t…. nah, I do care about that!

Also it can easly happen that the lodges don’t have showers. That was the case here. Sometimes you just have a minute long warm water or like here no shower at all. You could object but there is no alternative. You just wash yourself as best as you can and smell together with everybody else. They don’t care!

A tip for everybody the desserts up there are great. Apfelstrudel, Kaiserschmarrn, Mohnkuchen all good German desserts. Only the diversity of main dishes is not exsisting! Bratkartoffeln mit Spiegelei, Klöse, Schnitzel, Gerstensuppe and Schlutzkrapfen are the things you eat and nothing else. But they cook them well!

This day is the reason for the headline.
Since we were staying at the Edelrauthütte for a while longer we just wanted to do a “little” day trip. Or my cousin, aunt and I. My uncle wanted to hike down to the car and buy new shoes! He was gone from 9 am to 7 pm! But he had new shoes at the end of the day together with melted gummi bears and tissues for me! Because up there in the mountains my polen allergies reached a new high 🙁

Anyway we wanted to hike up the “backyard mountain” the Napfspitze. Our new host told us it was an easy trip. Well the path’s best description are the stairs Frodo takes up to Mordor! Only, as I staited, he didn’t need to climb them down again! We had to!

Well, ones we were up there we had to go down again. With the help of an already rusty cable sometimes attached to the mountain sometimes not we made our way down. But there a new world opened. The side of our lodge was grey and rocky. This side was the Shire/Auenland. Green hills and dark blue lakes until the world dropped and vanished in a deep valley only to continue on the other side. For all we knew the other side could have been China (there was a wall). You were compleatly in another environment than moments before!
My uncle continued on the wavy trail while my cousin, aunt and I ate our sandwiches near the lakes. Then my aunt and I decided to go swimming even though it wasn’t as warm as the day before.
My cousin didn’t want to ruin her band-aids.
And so I had my first bath in a mountain lake! It was icy cold and there were little fishes which nibbled at our feet. We didn’t meet anyone there all day. We were completely alone with just a few sheep as company. I didn’t know it was possible today to be surrounded just by nature and feel tiny in a so much bigger world around you. It was wonderful!

The way back however was horrible! I was so exhausted from I don’t know what. It was my time to carry the backpack and I had to stop every 5 minutes to drink water and get air into my lungs. I really didn’t appreciate that ascent!
The way down in comparison wasn’t that bad. We were afraid the stairs to Mordor would kill us on our way back (a possibility!) but they didn’t. After only an hour I think we were down again.

The rest of the day we spent reading outside in the sun, taning us as best as we could wearing a sports bra and hiking pants.