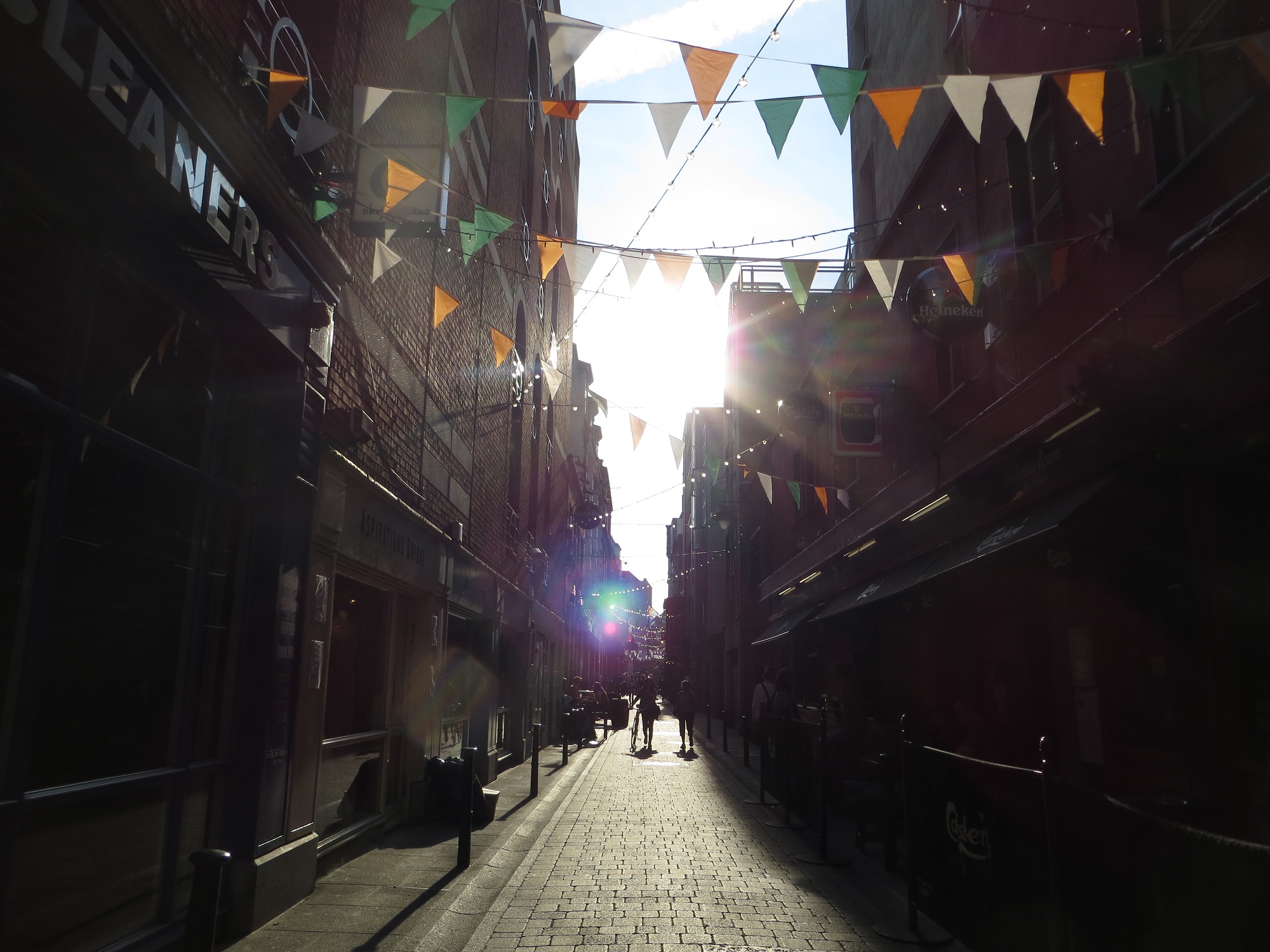 2 1/2 weeks or 17 days are a long time when you don’t have a kitchen and only stay at bed & breakfasts. So we (my dad, cousin, aunt and I) had to eat out every evening. We experienced quite a lot:

Dublin: (or the town where there is no food after 9 pm)

We had our first lunch of the trip in Dublin. A little place called The Fumbally. It’s one of these alternative restaurants/bistros/coffee shops. You can eat Falafel or soup or cake or nothing. Also the croud is dominated by long haired males with tatoos and university students after their yoga class. The food is excellent and it’s not in a touristic area. So you chance to meet locals is quite high.

Then of course there is Temple Bar for the evening. Your chance to meet locals other than the waitors is zero. But you can listen to Irish music on the streets or in one of the bars. There are multiple little restaurants if you are hungry. Also an Irish Guiness is a thing to try when you are there. (I personally prefer harp beer)
Here we sat outside in a little square. A view drunks were disturbing the atmosphere and the croud was so large that you couldn’t see the musicians. So to experience the “Irish” tourist culture it’s a good place but if you want a quiet evening, don’t go there.

My biggest surprise of the whole trip was that some grocery stores called SPAR have a Tim Hortons. The Canadian coffé shop is my favorite in the world! Sadly they don’t have their bagles or french vanillas in Ireland but still the doughnuts! But if you are in Canada, please bring back some French Vanilla powder for me, ok?

Also the north side of the river might not be as attractive as the south side and a lot scarrier. But there are great Japanese and Arabic places to eat for example on Capel Street.

Another funny story is how we ended up at 11 pm in a 24 hours fish and chips place. We were walking all day through the city and finally seated in the oldest pub of Ireland. But they only serve food until 9 pm like most bars and restaurants. But we were all hungry so the waitor told us about this little fish and chips place around the corner. Off we went and 15 minutes later we had all a big portions of cod and greasy chips.
While we ate a group of boys, a buisiness man and our waitor from the pub showed up and orderd as well. After that we went back to the pub to drink a beer and listen to two great musicians. We even knew some of the songs.

In general: There is a restaurant from every country of the world in Dublin. Italian, Nepali, Indish, Japanese, Chinese, French, Arabic, Ethopian….so have fun choosing 😉

Kinsale:  (or the town of overpriced restaurants)

Fishy Fishy calls itself a serious sea food restaurant. We should have listen to this maybe, but we went there like we were (T-shirt, old pants and a rainjacket). Everybody else was dressed formal. But they let us in and eventhough it was the most famous restaurant in town (the owner is a TV cook) we only had to wait 5 minutes. 5 Irish minutes.
But our waitor was really funny and I was quite emberessed at the end through multiple missunderstandings.
I am more or less a carefull fish eater. Normally I like fishsticks or maybe pollack/Seelachs. My opinion to fish changed a lot over this trip but that day was only day 3. So I took the fancy version of fish and chips. Still it tasted exellent.
My tip: If you show up after 8 pm it’s easier to get a table.

In General: Little toursitic towns tend to overprice their food. Go to a pub and eat some chips or eat out of town if you want to save money. If you want to eat a little something special ask at you hotel or B&B. They have plenty of tips for you.

Glengariff: (or the town where we became women right activists)

Glengariff has so many restaurants that even if all the citizens of the town would eat out they wouldn’t fill half of them. Luckily Glengariff has just as many hotels and B&Bs. So while roaming through the town on the search for food we were stopped by a shady pub owner. The soup would be on the house and we could have the spot at the window he promised. However I don’t think that it’s a great marketing stragedy to jump in front of potential guest and scare the hell out of them.
Anyway the restaurant which we settled for had very nice waitors. It was connected with a hotel, stylish and welcoming.
Our waitress was new and sooo nervous. But if we had a question she didn’t know she always went to ask someone insted of saying I don’t know. The second waitor we had was a handsome young man with a big smile who joked with us. My cousin and I had our fun watching him over the evening.
The food was good and we had a big discussion about the role of girls in our school (neither the boys or the girls came of well).
In the end we were almost alone and the waitors cleaned all around us. But they didn’t bother us or we them. I didn’t have the feeling that I had to leave because they were closing soon. It was a nice evening.

In General: Vegetarians have a hard time in Ireland. Most of the time the soup of the day and vegetarian curry are the only meatless choices on the menue.

Glinn: (or the town where we became fans of Irish beauty competitions)

Glinn has about one pub. This pub has Scotish pie and soup and beer. This pub is great.
We ate there on old chairs and coffee tables together with a Scotisch, English, Irish family and a local guy in his thirthies, who was a bit lonley and liked that he had someone who listend to him.  By chance it was the evening of the finale of the Rose of Tralee. Tralee is a town half an hour away and on our way we even saw the big tents and hundrets of cars. The Rose of Tralee is a competitions a bit like in the movie Miss Congeniality/Miss Undercover. 32 girls had to dance and sing and give speeches. They came from all over the world but had an Irish background. Their dresses were horrible and so was their singing, but the people in our little bar loved it. The volume was turned up and everybody watched exited how a “Rose” from an Irish town a little bit further north won. We all sighed and laughed and then talked a bit about Irish politics with the lonley guy from Glinn.

In General: Don’t judge a place from the outside. A lot of pubs are nice inside, filled with friendly people and souvenirs.

Oughterard: (or the town where I ate the best fish of my life)

We arrived late but our hostlady was the most welcoming person in Ireland. We stayed a little out of town and after serving us tea with cookies she phoned a local restaurants to reserve us the next available table.
The Greenway Café&Restaurant is one of the best places I ever ate in. It only has 6 tables and a tiny shop where you can buy local products. The waitor (and possibly owner) explained every meal and even though we arrived like half an hour before the kitchen closed we got everything we could wish for. My fish was exellent. Everybody tried and everybody had this WOW-face. I enjoyed every bite to my cousin’s delight. The soup of the day (sweet potato and carrot) was amazing too and the desert (apple crumble) too. I never ate so much so late but it was worth it.

In General: Don’t go for the big places. The smaller the place the more less people and the more time they have to prepare your meal.

I hope you had some fun reading and if you are traveling to Ireland you now know a little about Irish restaurants. 🙂