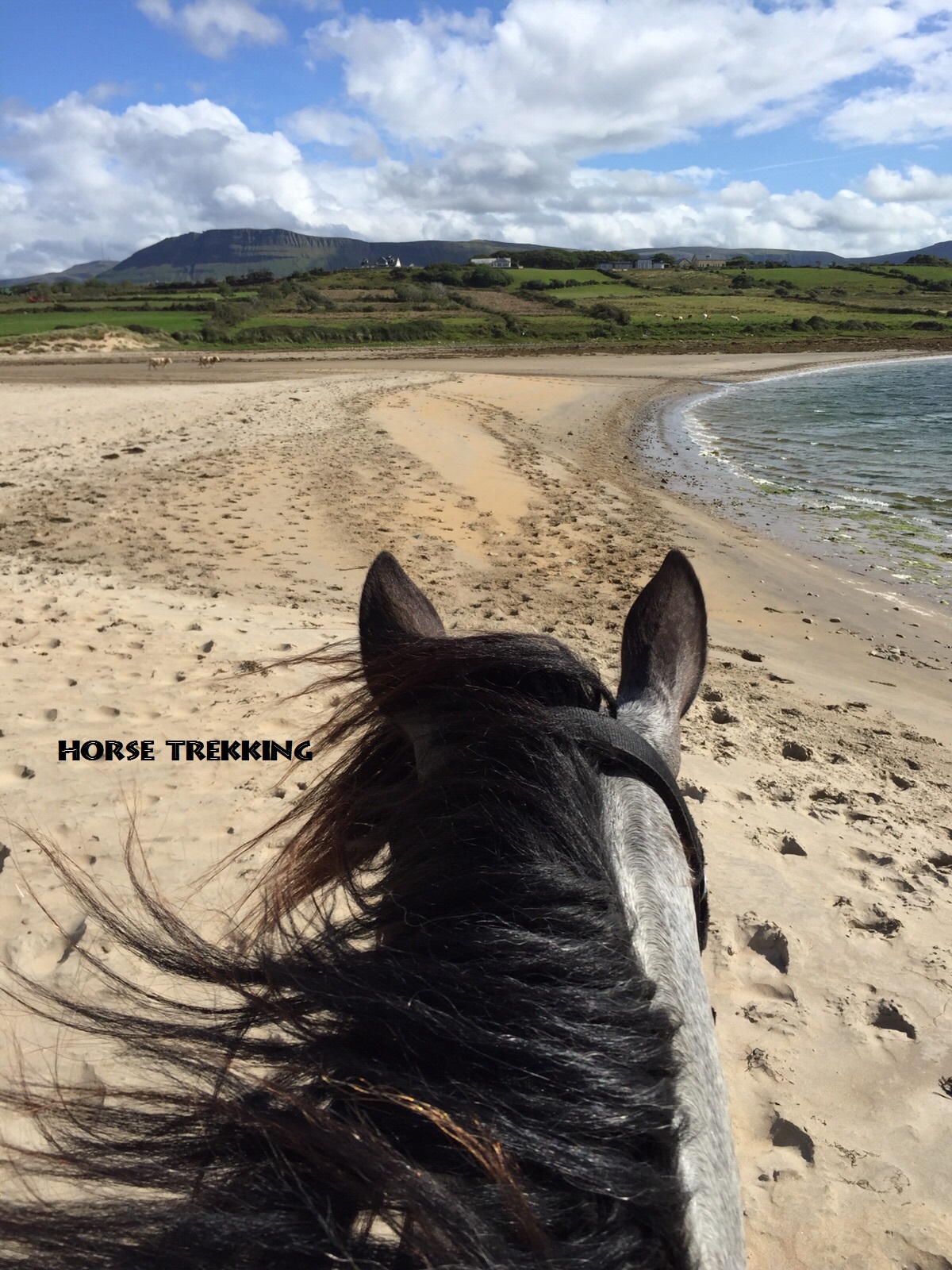 After an one and a half week long roundtrip of Ireland (of wich you can read here: https://crossingland.com/an-irish-roundtrip ) we arrived north of Sligo near to the Northern Ireland border. Here and around Donegal we would ride for a week. The part of Ireland was advertised as the one with the most faries per square meter.
I don’t want to tell you every day step by step, but the highlights:

But the cutest thing ever was when you arrived in the morning on the paddock or in the stable and three pony heads were looking towards you. On the paddocks Bobby and Cider also came towards us. Butler, my aunts horse, was quite old so he prefered to be picked up. We knew it was only because they wanted food but still…. Also having your “own” horse for a week was great. You could get to know his flaws and react. My cousin’s horse for example hated to go on the left side of the road which is really unpractical in Ireland where everybody drives left. Since we had to ride on big streets sometimes my cousin had a hart time convincing Cider to go left. Also sometimes only Butler would walk in the front.

The last day we were picked up by the Italian??? ranger of the farm. He trained all the horses himself and always wistled, sang and said ” Ladies, Ladies” in his Italien??? accent. We heard him on Wednesday when the 3 day trail people got picked up. “Ladies, Ladies, put everything everywhere.” “Put everything everywhere!” was also the first thing we heard from him on friday when he picked us up.
The day before we didn’t have a fixed route and so we rode through the neighborhood. We ended up on a hillside with a fantastic view over a lake and green medows. Finally the weather was sunny again! Also we almost got stuck in a swamp 😀

So when the guy came and picked us up he drove to a medow that belonged to the farm. The horses could relax for a week before starting a new trail with new people again. It was hard to think of strangers on “our” horses. So he had this big truck were 8 horses could fit it and when we arrived at the how it looked empty paddock we suddenly honked the trucks horn. I have to say it was 8 am and we were really tired and the horn was really loud.
Any German horse I know would run away and go crazy by this roar but our horses in the truck didn’t even snorted. Nothing happened.
He honked again. By this time we were out of the truck so it was even louder. He put food in the trays on the paddock and then honked again. Still nothing. I joked that any moment a herd of horses would gallop over the hill out of the morning mist. He honked again.
And then suddenly like in a movie a thunderin sound was to be heard. I have to admit I didn’t see the first horses but suddenly over 50 horses did came gallopping over the hill out of the morning mist. Brown, black, white, cream coloured horses. They made an ellegant curve and then ran over to the treys and began to eat while kicking and biting each other like real wild horses.
My cousin and I must have looked really stupid.So the ranger went in and caought one horse after another. Then he handed them to us.
Over the whole trip I was amazed how open the Irish are with their horses. In Germany an unguided trail with horses is near impossible if the horses aren’t yours. After 10 years experience I was not permitted to hold 2 horses at once. Here people didn’t even want to see how we rode. They just asked three question and then handed us 3 horses, said good luck and released us.
Now the Italian?? handed all of us 2 horses, mine being the biggest and me being the shortes. Not 4 meters away the rest of their herd was fighting for food only a fence between them and us. The horses were relativly calm but still in Germany I wouldn’t even be allowed to pet one of the animals.